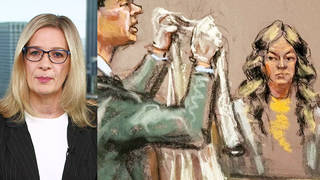 We continue our conversation about the trial of alleged sexual predator Harvey Weinstein, ahead of the scheduled start of opening arguments today. Weinstein is facing five felony charges, based on accusations brought forth by two women in the case, and, if convicted, could face up to life in prison. Last week, one of his accusers, Jessica Mann, broke down and went into an apparent panic attack during questioning from Weinstein’s lawyers, forcing the judge to adjourn proceedings for the day. Mann was made to read past emails to a boyfriend, in which she disclosed she had been sexually assaulted before meeting Weinstein. She accuses Weinstein of raping her in New York and Los Angeles and said she had an “extremely degrading” relationship with him.

We speak with Louise Godbold, the executive director of Echo, which provides training to trauma survivors and those who support them. The organization is hosting a conference for trauma survivors, including Weinstein survivors, next month called “And Still We Rise,” a reference to the Maya Angelou poem.