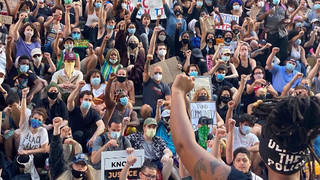 New York police have closed in on peaceful protesters camped outside City Hall who are demanding $1 billion be cut from the police department’s $6 billion budget, as the city approaches its July 1 budget deadline. Mayor Bill de Blasio announced a budget deal that would move $1 billion in NYPD funding in an apparent nod to protesters’ demands, but organizers say they’re not satisfied. “All they’ve really done is shifted money from the NYPD budget over to school safety officers,” says Bianca Cunningham with the #OccupyCityHall encampment, who adds that school safety officers still contribute to a school-to-prison pipeline that disproportionately hurts Black and Brown communities. “It shows that they are completely tone deaf about what this moment is about,” she says.