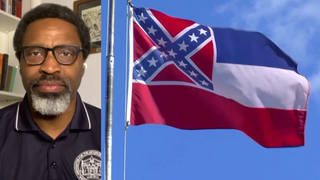 In a historic vote, the Mississippi state Legislature passed a bill to remove the Confederate battle emblem from its state flag, making it the last state to do so, after an ongoing nationwide uprising against racism and police brutality and a mounting pressure campaign in Mississippi. Derrick Johnson, president and CEO of the NAACP, says it has been a “long journey” to change the Mississippi flag. “We’ve had to fight both against the symbol of racial oppression, the revisionist history of racial oppression, and now the next step is to fight against the structural racism that’s embedded in the public policy, not only in the state of Mississippi but across the country,” Johnson says. He also addresses how President Trump shared a video on social media of a Trump supporter chanting “white power,” as well as the growing boycott of Facebook for allowing the spread of hateful and false information on its platform.