For years, many of us have criticized President Donald Trump for his attacks on the media when they asked him about controversies involving him or his family.  The media however has been largely silent as Democratic leaders have ratcheted up attacks on any journalists who question their positions or the party lines.

That was evident recently when Speaker Nancy Pelosi bizarrely attacked CNN anchor Wolf Blitzer as an apologist for the Trump Administration simply because he pressed her on blocking the stimulus package. Other liberals piled on Blitzer for daring to challenge the party line.  Now Joe Biden has attacked the first reporter from one of the networks who simply asked for a response to the unfolding scandal involving his son Hunter Biden. In emails found on the laptop, Joe Biden is named in communications with foreign figures seeking influence over U.S. policy. 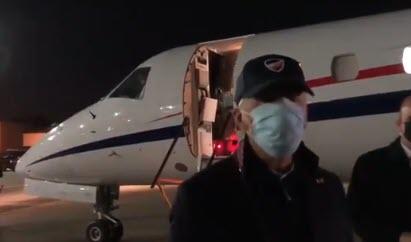 Biden refused to comment and then disparaged CBS News reporter Bo Erickson for even asking him the question.

Erickson simply asked “Mr. Biden, what is your response to the New York Post story about your son, sir?”

Biden responded “I have no response.”

Then Biden added “I know you’d ask it. I have no response, it’s another smear campaign, right up your alley, those are the questions you always ask.”

I asked Joe Biden: What is your response to the NYPost story about your son, sir?

He called it a “smear campaign” and then went after me. “I know you’d ask it. I have no response, it’s another smear campaign, right up your alley, those are the questions you always ask.” pic.twitter.com/Eo6VD4TqxD

Biden has been hammered for refusing to tell voters whether he will support packing the Supreme Court. This however concerns emails where there are not just allegations of influence peddling worth millions coming from China, Russia, and Ukraine but references to his knowledge or possible involvement. As I wrote recently, there is a striking refusal of the Biden campaign to offer the obvious responses to such allegations.

I have expressed my skepticism over how this laptop was found and when it was disclosed publicly. This could very well be the work of foreign intelligence. However, as I discussed this morning in the Hill, that does not mean that the emails and photos are fabricated. Many of us have long denounced Hunter Biden’s work as a classic influence peddling scheme. That does not make it a crime, but it is common form of corruption in Washington. These emails however, if true, would contradict Joe Biden’s past statements of his lack of knowledge or involvement.

Moreover, it would shatter Joe Biden’s repeated assurance that his son did “nothing wrong.”  One can argue over whether this is a crime, but few would say that there is nothing wrong with raw influence peddling worth millions with foreign entities.

Now however the question is how other journalists will respond.  ABC has yet to even air the allegations and failed to ask a single question to Biden on it during the recent town hall event. Whether these emails are fabricated or authentic, this story is major news. The question is whether there are major news organizations willing to report it.