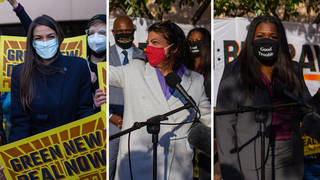 Indigenous, racial justice and climate activists staged an occupation outside the Democratic National Convention in Washington Thursday, calling on President-elect Joe Biden to take immediate climate action and to approve the Green New Deal. Advocates are also calling for a Cabinet free of lobbyists and others with close industry ties. A number of lawmakers spoke at the protest, including Congresswoman-elect Cori Bush from Missouri and Congressmember Alexandria Ocasio-Cortez of New York. We air excerpts of their remarks.